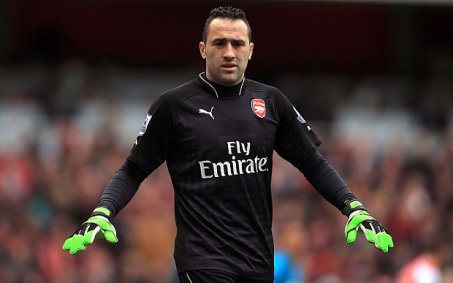 Napoli have reportedly acquired the services of goalkeeper David Ospina from Arsenal on a temporary basis. The Colombian had become the Gunners’ third-choice goalkeeper following the arrival of Bernd Leno this summer and this has eventually urged him to secure a fresh challenge elsewhere.
According to The Guardian, the Naples outfit have signed the £40,000-a-week shot-stopper on a season-long loan with the obligation to buy at the end of the forthcoming campaign. The Colombian is expected to fulfil the void left by Pepe Reina’s departure to AC Milan and this should assure him of the regular gametime, he has been craving for in recent seasons.
Earlier this summer, the Naples outfit had recruited goalkeepers Alex Meret and Orestis Karnezis on temporary deals from Udinese and the former was widely expected by many to take up the first-choice goalkeeping duties for the 2018/19 season. However, his ambition was shortlived after he broke his arm in just the second day of pre-season and this may have proved the key cause behind Napoli’s decision to land Ospina.
Meanwhile, at Arsenal, Petr Cech has claimed the number one role under Unai Emery despite widespread suggestions that Leno could start between the sticks. The German had shared the goalkeeping duties with Cech during the course of pre-season but Emery is seemingly prepared to wait longer before introducing the 26-year-old to the rigours of the Premier League.
Arsenal begun their campaign with a rather disappointing 2-0 loss at the hands of Manchester City but they should be aiming to bounce back when they take on Chelsea on the road this weekend. The Capital outfit have competed effectively against the Blues since May 2017 with not a single competitive defeat and this should give them the motivation for Sunday’s London derby.