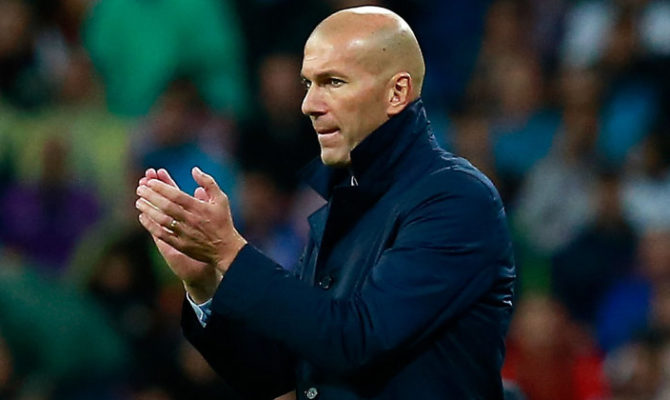 Former Real Madrid manager Zinedine Zidane is reportedly willing to become the next Manchester United head coach, should Jose Mourinho be axed during the ongoing campaign. The Red Devils have suffered an early lapse in their Premier League pursuit after a shock 3-2 defeat at Brighton & Hove Albion and this has put the Portuguese’s future under question.
According to The Mail, Zidane is seemingly keen on making the switch to Old Trafford and he has supposedly told his close associates that he would prefer succeeding Mourinho at the helm. Nevertheless, the move may not happen anytime soon with Mourinho said to receive the backing of executive vice-chairman despite the recent differences between them.
During the summer, Mourinho had been intent of making at least five signings and most of those were aimed to close the gap to Manchester City in the title race. However, much to his frustration, the hierarchy failed to secure a number of proposed targets and they eventually managed just one marquee signing in the form of Fred whilst Diogo Dalot and veteran goalkeeper Lee Grant made the rest of the summer business.
As such, the Portuguese tactician had anticipated a tough season ahead and the beginning has certainly not been promising with United producing a mediocre performance on the road to Brighton & Hove Albion for the second season running. United had boosted their morale with an opening day triumph over Leicester City but their showing was far off from their standards in the South Coast where they suffered a shock 3-2 defeat.
Mourinho’s mean are presently three points behind most of their title rivals at such an early phase of the season and they now face the compulsion to win versus Tottenham Hotspur on Monday night to stay within range of the pace-setters. United have enjoyed a four-match winning run against Spurs at Old Trafford but they can expect a tougher challenge this time around with their central defensive department looking largely vulnerable.