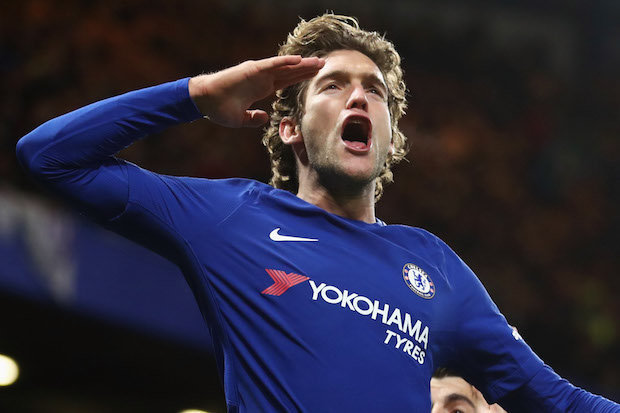 Chelsea could be prepared to sanction the surprise sale of Marcos Alonso, should Atletico Madrid agree to match their £54m asking price. The Spain international joined the Blues from Fiorentina less than two years ago and he has since established himself as the first-choice on the left side of the backline.
According to Spanish publication AS, the west London giants could sanction the sale of Alonso before the Spanish transfer deadline with Atletico among the main contenders for his signature.
The Europa League holders are presently expecting the departure of Felipe Luis with Paris Saint-Germain leading the hunt for his signature and this has urged manager Diego Simeone to look into a deal for Alonso, who was previously in the ranks of Real Madrid.
Nonetheless, the move does not assure Alonso of regular gametime unlike at Stamford Bridge, given Lucas Hernandez has certainly cemented the left-back position after starring for France during their World Cup triumph.
Alonso has made a strong start to the ongoing season with a goal and an assist from the opening two league matches and AS suggests that the Blues are not desperate to offload his services unless their £54m price tag is matched.
As such, there appears only a minute possibility that the Spaniard may make way from Stamford Bridge, given Atleti would not want to be spending massive sums on a player, who may only command a deputy role at the beginning.
Chelsea have started the campaign with back-to-back league triumphs over Huddersfield Town and Arsenal and the latter of those games witnessed Alonso score the winning goal in a 3-2 victory.
Up next, the Blues make the trip to Newcastle United for a Sunday league meeting and Alonso and co. may have to produce their best performance on the day, given the club have struggled at St James’ Park with no victories in the previous five visits.