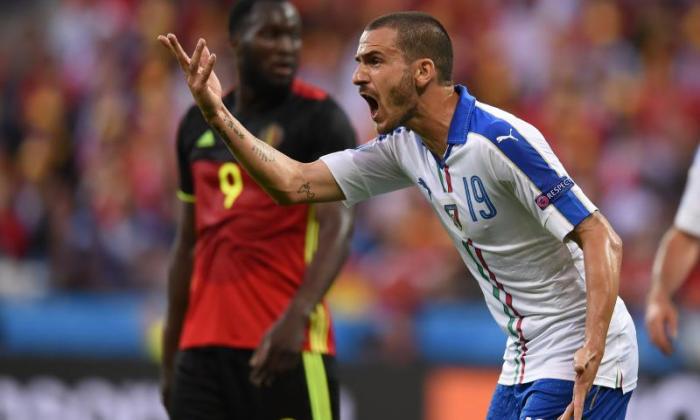 Manchester United could reportedly make an attempt to lure Leonardo Bonucci from AC Milan during the ongoing transfer window. The Italy international has been with the Rossoneri for just one year since his Juventus exit but he could be headed through the exit door amid the club’s financial troubles.
According to The Express, Jose Mourinho’s side could enter the race to sign the former Juventus man after getting to know of the Rossoneri’s financial crisis. The San Siro giants have already been banned from the Europa League after failing to meet the Financial Fair Play requirements for the 2017/18 campaign but they may yet have to offload key players in order to come in good terms with UEFA.
As per the publication, the Rossoneri need to recoup at least £45m in finances before the transfer deadline next month and Bonucci could be one of those offloaded for around £30m, considering he commands the highest wage among the players contracted to the San Siro outfit.
Since the start of the transfer window, United boss Jose Mourinho has been backed to sign an experienced central defender to bolster the squad and based on this, Bonucci perfectly fits the bill with the Italian widely regarded as one of the best centre-backs in the modern game.
Nevertheless, there remains a key difference in terms of the intensity between the Serie A and the Premier League and this could pose a predicament for United, should the centre-back fail to meet the demands of the English game.
Aside from Bonucci, United have also been associated with a move for Tottenham Hotspur’s Toby Alderweireld but they have yet to make a formal approach after being put off by Spurs’ hefty £75m price tag.
Despite this, they have a ray of hope of signing the Belgium international for a reduced fee, considering Spurs are unlikely to risk their contract rebel entering the final year of his contract next summer where a £25m release clause could be triggered.