Manchester United signed a new contract with rising star Marcus Rashford last summer and the England international is now set to get another pay rise in an interesting deal.
According to the Sun, the 19-year-old center forward has impressed new boss Jose Mourinho and the Red Devils are set to offer him a new four year deal next summer.
The teenage striker has mainly started the games on the bench due to the presence of a superstar like Zlatan Ibrahimovic. Moreover, the former Chelsea boss has mostly utilized the youngster on the left wing.
As per the provided Sun link, Rashford currently earns £20,000-a-week and United will hand him a deal that will make him earn an extra £5,000-a-week for each year until 2021.
This means that he will be earning £25,000-a-week in year one, £30,000-a-week in year two, £35,000-a-week in year three and £40,000-a-week in the final year. Overall, the four year deal is going to be worth £6.76million in total ($8.5million).
In 27 appearances for the Old Trafford club, Marcus has netted six goals and also provided two assists this season.
Also Read: Mourinho Sends Man on Mission, Man Utd Want $48million Star 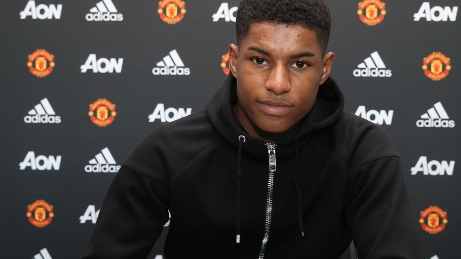