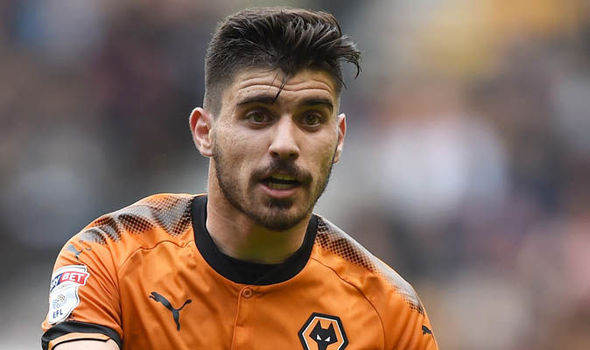 Manchester City and Manchester United are reportedly monitoring the development of Wolverhampton Wanderers midfielder Ruben Neves with a view to a future approach for his signature.
The Portuguese footballer made the shock move to Wolves last summer after they paid a Championship-record fee for his services and he was thereafter influential towards their promotion to the top-flight.
Neves was thereon linked with a potential big-money move elsewhere but the midfielder decided to stay put with the west Midlands outfit after he was rewarded with a fresh five-year contract on weekly wages of around (Birmingham Mail) £50,000-a-week.
According to Goal.com, Pep Guardiola’s side are said to have made an approach for Neves during the dying stages of the Premier League transfer window but their efforts vent in vain with Wolves reluctant to lose the play on the eve of their season opener.
As such, the Premier League holders are supposedly planning a fresh approach for either January or next summer but Guardiola fears that Manchester United could hijack the move after knowing of their transfer interest,
Neves’ agent Jorge Mendes has also represented United boss Jose Mourinho for the long-term and Goal suggests that the Portuguese tactician would fancy his fellow countrymen making the switch to Old Trafford.
City are seemingly desperate for a new central midfielder after failing in their pursuit of Jorginho during the summer and Guardiola considers Neves as the perfect fit to adjust to his brand of football at the Etihad Stadium.
Nevertheless, the Mancunian giants can take things for granted with United anymore, given they were beaten to the signings of Alexis Sanchez and Fred in each of the previous two summer transfer windows.
The reigning English champions were also taught a lesson for delaying their agreement to sign Jorginho from Napoli this summer after Chelsea pounced on his signature with the better deal on the table.