Liverpool have been linked with Brazilian international and Roma star Emerson Palmeiri in the past and now the latest reports are once again linking the left back with the Anfield club.
According to Gazzetta Dello Sport (press image provided below), Roma are facing budgetary concerns at the moment and that is why they are willing to listen to offers for even their star players like Nainggolan and Strootman.
The renowned Italian source have mentioned that one player who is expected to move away from the Giallorossi is Emerson.
Also Read: Liverpool have Made Approach to Sign $73.5million Star – Contract Already Offered
It is stated that Juventus are interested in signing the Samba defender but Roma are trying to send the Brazilian to the Premier League where Liverpool are leading to secure his signature. Furthermore, GdS have mentioned that Emerson’s price is set at 25 million euros ($31million).
The 23-year-old left back was a regular starter for the Serie A club last season, he featured in 36 games, scored 1 goal and provided 1 assist. This season, he has mainly been on the treatment table and after returning from injury, he has so far started just one game for the senior Roma team.
At Liverpool, Spanish international Alberto Moreno started the season brightly in the left back position and in his absence, Andrew Robertson has proved to be brilliant. Therefore, Klopp really does not need to sign Emerson. 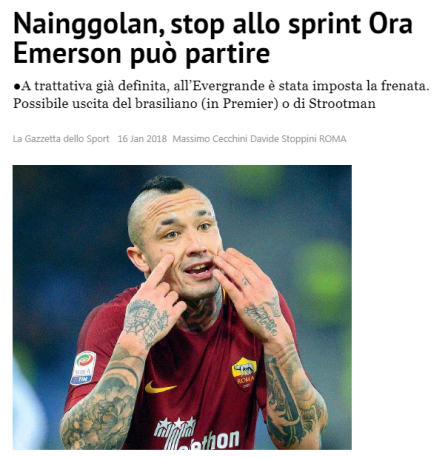