Liverpool are heavily linked with French international and Monaco star Thomas Lemar and latest reports suggest that the Merseysiders are determined to secure his signature.
The Reds made two concrete offers to sign him, the last one worth 64.8million pounds (Sky Sports), but the Ligue 1 champions have rejected the advances and want to hold on to their prized asset this summer.
Today, L’Equipe (press image provided below) have provided an update and claimed that after the rejection of Liverpool’s offer, the British side are still not ready to give up.
The above mentioned figure is the highest paid by any club this summer to hire the services of the Les Bleus playmaker, who directly contributed in no fewer than 31 goals in the last campaign (14 goals and 17 assists).
Also Read: Liverpool Reach Agreement Worth $84million to Sign Star
Coutinho’s future is up in the air and Monaco are well aware of the fact that the Reds can get a huge fee from his sale.
If Liverpool are really determined then it will not come as any surprise to see Klopp making a third offer to sign the 21-year-old star. The question is, how big should the offer be?
Not so long ago, Duncan Castles reported for Daily Record that the French giants rate Thomas around 60 million euros but Liverpool have already surpassed that sum. Perhaps, Monaco are looking for a fee that was reported by the Mail and Mirror last month.
Mirror claimed that Monaco slapped a price tag of 80 million pounds (€86million) and Daily Mail reported that a package worth that sum could persuade Monaco to sell. In your opinion, should Liverpool raise their bid to sign Lemar? 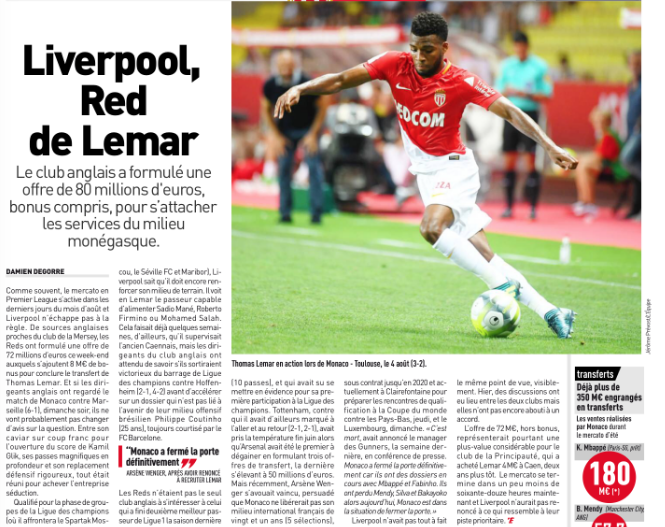