Manchester United continue to be linked with Spanish international and Real Madrid star Alvaro Morata and almost everyday, there is a new story.
The latest one reported by Spanish source Marca is surprising and it will be fair to say that it is highly unlikely it will be true.
Marca claim (image from Sport Witness) that Man Utd have agreed a five year deal worth €125 million with the 24-year-old Spanish striker. This meansthat on average, he will be getting around €25million-a-year, €480,000-a-week (£420,000-a-week).
Last summer, the Red Devils shattered the transfer record to hire the services of French superstar Paul Pogba from Italian champions Juventus. Not surprisingly, the Old Trafford club made him the highest earner as well. The versatile midfielder is earning around £290,000-a-week (Daily Star).
Morata is a quality talent but he warmed the bench for Real last season and has not done enough in his career to deserve the above mentioned salary.
What’s more baffling is that currently, he has a contract with the Los Blancos that makes him earn just £73,000-a-week (Daily Star). Therefore, in all fairness, the figure quoted by Marca is bizarre and unbelievable.
Also Read: $56million Star has Agreed Terms to Join Manchester United 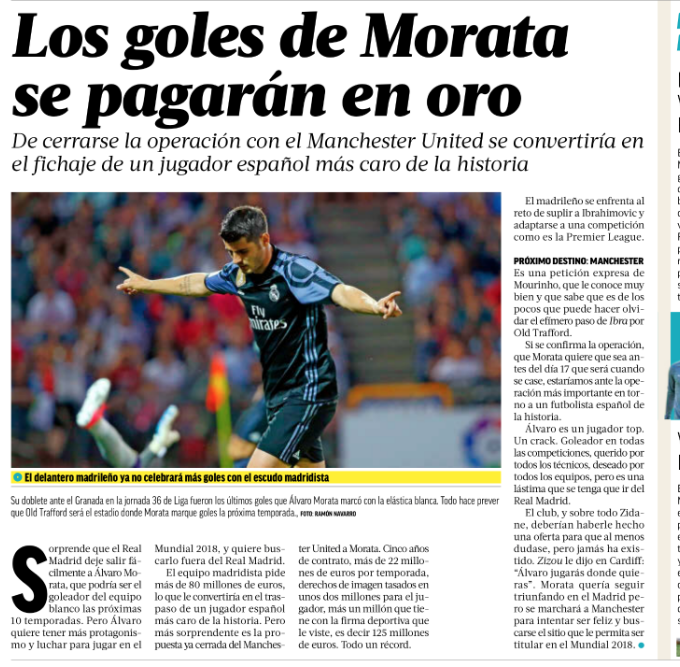