Jose Mourinho signed Eric Bailly last summer to improve his central defense and it seems that he is ready to sign another central defender in this summer’s transfer window as well.
Swedish international Victor Lindelof was heavily linked with a move to Manchester United in the winter transfer window (via Mirror).
Now, according to Portuguese source Record, the former Vasteras star has reached an agreement with the Red Devils and in the coming days, he will be traveling to Manchester to complete his medical tests and officially sign for the club.
Lindelof is a versatile defender, who can also be deployed in the fullback positions as well. Last season, he was solid at the back for Benfica and helped the team retain the Primeira Liga title. He featured in 32 league games and scored 1 goal.
Victor’s current contract with the Portuguese giants will expire in 2021 and it has a huge release clause (Mirror) of 50 million pounds ($64million).
However, as per Record (Press Image provided below), Benfica would get €35million up front and €5million in potential add-ons for their prized asset. In your opinion, is Lindelof good enough to improve Man United’s back line?
Also Read: Manchester United Eye Move for £50million Rated Star 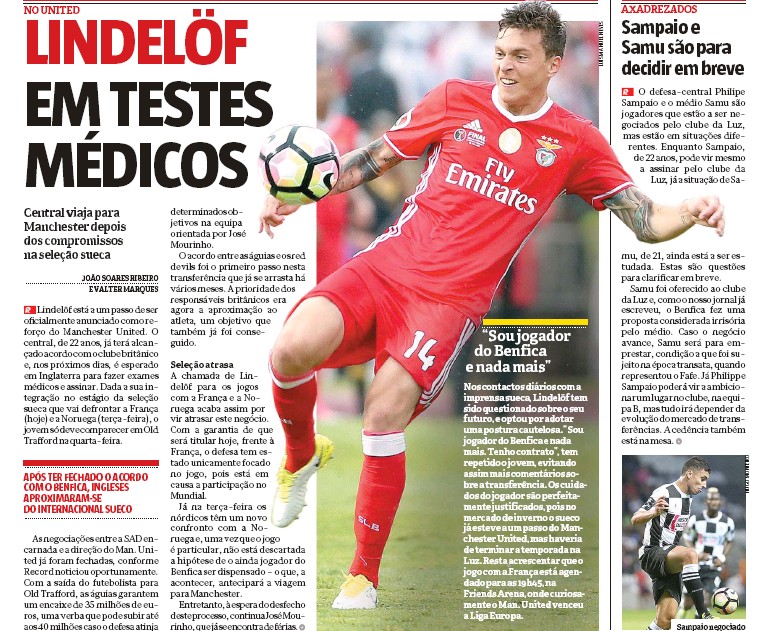