Tottenham have conistently progressed under the management of Argentine boss Mauricio Pochettino but they have yet to win a title. The South American boss needs to sign top quality players in the transfer window to challenge for big prizes.
Last season, Spurs were brilliant in the Premier League, however, they were humiliated in the European competitions. The North Londoners were ousted from the group stages of the Champions League and were eliminated in the first KO round of the Europa League by Gent.
As far as the latest transfer rumors are concerned, reports in Portugal suggest that Tottenham are serious about signing Sporting CP midfielder Adrien Silva.
As per A Bola, Tottenham are committed to sign the 28-year-old star and the Primeira Liga side have already informed them that he can be lured for a fee of 30 million euros ($33million).
Silva’s current contract with Sporting will expire in 2020 and it has a huge release clause (press image provided below) of 45 million euros ($50million)
Adrien is mainly a central midfielder but he can effectively play in the attacking third as well. In the last campaign, he featured in 36 games and directly contributed in 10 goals (6 goals and 4 assists).
A Bola claim that Leicester offered 30 million euros to sign Silva last summer but the move could not materialize, however, this time around, the scenario is different and the player will be allowed to leave for the mentioned fee.
The Portuguese source further state that Spurs are looking to sign him as soon as possible, even before the start of the Confederations Cup (17th June) and we can expect to see significant progress in the coming days. 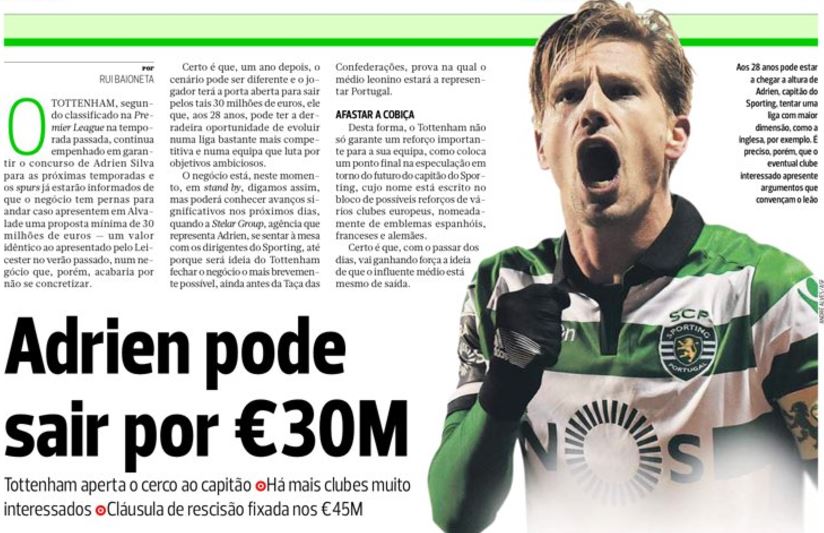