Chelsea have been interested in signing Real Madrid star Alvaro Morata for a long time but now they face serious competition from Arsenal.
The North Londoners have lacked a prolific No.9 since the departure of Robin van Persie from the Emirates and Morata can solve that dilemma for the Gunners.
According to the Sun (press image provided below), Morata is rated around 50 million pounds ($64.4million) and Arsene Wenger is ready to splash that sum to agree his signing in the summer transfer window.
The Spanish international left Juventus to re-sign for Real Madrid last summer, however, under the management of Zidane, Morata has not been able to get regular starts, even when his stats have been impressive.
The French boss has mainly preferred compatriot Benzema in his starting XI and the La Roja star must leave the club for regular first team football.
So far, Alvaro has only started 13 league games for the Los Blancos and directly contributed in no fewer than 20 goals (15 goals and 5 assists) this season. His current deal with Real will expire in 2021 and he is only getting around £73,000-a-week (Star).
The Sun claim that Arsene Wenger is eyeing Morata as a replacement for Alexis Sanchez. It will be fair to say that replacing a playmaker with a striker makes little sense.
The former Barcelona star has been Arsenal’s best player this season and the club must hold on to him at all costs.
Chelsea won the Premier League title last night and will be playing Champions League football next season. Moreover, they have the financial power to pay Morata huge wages. On the other hand, Arsenal need Liverpool to slip up to have any chance of qualifying for the CL. In your opinion, should Morata join Chelsea or Arsenal?
Also Read: Arsenal Ready to Finally Agree $52million Star Signing 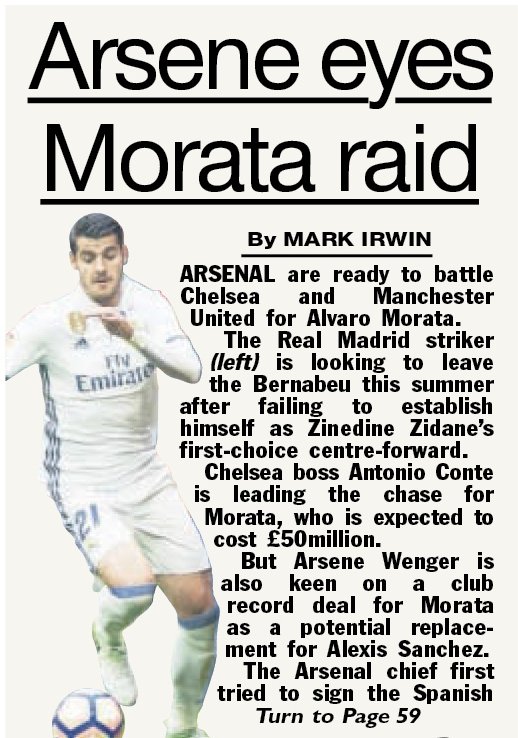