Liverpool need a new goalkeeper in the summer transfer window, that much is evident after the inconsistent performances of Karius and Mignolet.
Klopp must solve the goalkeeping conundrum once and for all and reports have linked Liverpool with numerous goalies.
Back in November 2016 (Star), the Reds were linked with £20m rated ($25million) Sunderland shot stopper Jordan Pickford. If the latest reports are anything to go by then Liverpool are seriously eyeing the 22-year-old player.
According to Telegraph, City are interested in signing Pickford, Liverpool are also regularly scouting the England international but they may move to sign Joe Hart next summer.
Hart has won the PL Golden Glove award four times but last season he was way too inconsistent for the Sky Blues and new boss Guardiola opted to loan him out to Torino last summer.
On the other hand, Pickford has been one of the best goalies in the Premier League this season in spite of playing in a relegation threatened team with a poor back line. Moyes highly rates the youngster and heavily praised him by starting (Telegraph):

“I’ve said before, in the process of building a club up, you have to sell people, but I hope it’s not Jordan. He’s been exceptional and most people see him as one of the brightest young talents around.”

Liverpool need a goalkeeper for the long term and Joe is past his best. On the other hand, Pickford’s best years are ahead of him.
Therefore, the former Borussia Dortmund boss must splash the cash to sign Pickford in the summer transfer window. Stats provided below also depict that Jordan has played better than Hart, who is in more of a defense minded league.
In your opinion, should Liverpool sign Pickford or Hart?
Also Read: Liverpool Ready to Clear Way and Finally Seal €70million Star Signing 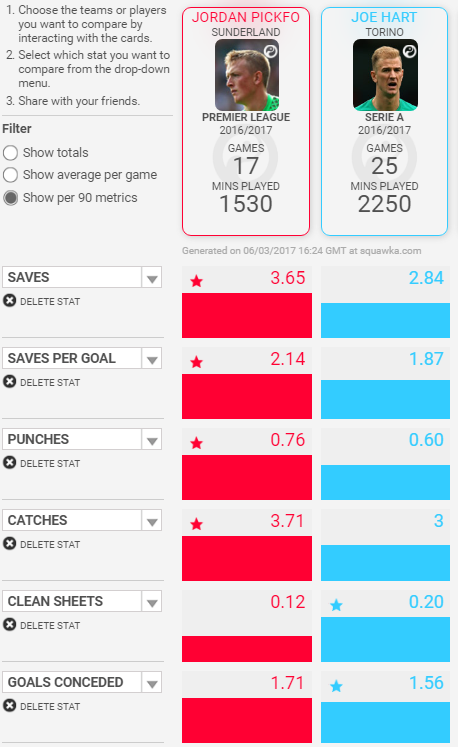