Chelsea Update – Star to Return in the Next Game 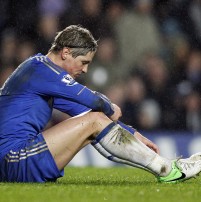 Chelsea could only gain a single point from their last two premier league games and Mourinho was that close to losing brilliant home record at Stamford Bridge.
The Blues will look to bounce back from the recent disappointments with a win in the next game against West Ham United.
Chelsea cannot afford to lose more points as other rivals, especially Manchester United are that close and may over take.
The Hammers are in horrific form, having only won once in their last 6 league games, Sam Allardyce’s side are currently 16th in the league and surely Chelsea are favorites to beat them.
Good news for Chelsea fans is that their star striker, Fernando Torres will be fit for the next game and will be ready to face West Ham after the international break.
El Nino has been in fantastic form for the Blues lately but injuries are still keeping him inconsistent.
Not only that, with the inconsistent form of the strikers, Mourinho is now looking for options and may sign a top quality forward in the January transfer window.
Nevertheless, the return of Torres will give Chelsea much needed boost to see off the challenge of West Ham.
Marco van Ginkel is the only long term injury concern Chelsea are facing. The summer signing suffered knee injury in late September and is expected to return next year.
Follow Soccerisma on Twitter: Soccerisma