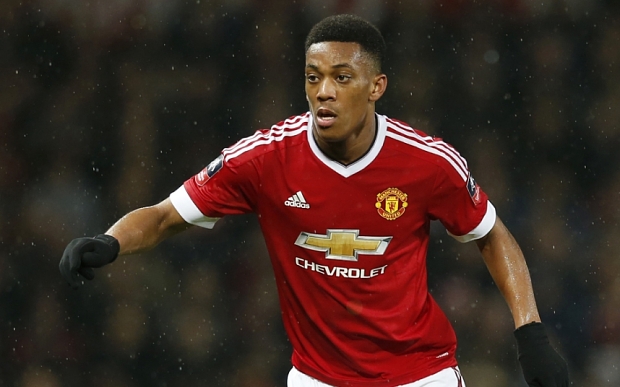 Manchester United attacker Anthony Martial has supposedly stalled on discussions over a new contract with the club amid his struggles to secure a regular role under manager Jose Mourinho.
A recent report from The Times suggested that the Frenchman is prepared to sign a new five-year contract with the club with the hope that he can outlast Mourinho at the Old Trafford outfit.
However, there has since been no update with regards to the proposed extension and The Sun suggests that the 22-year-old has binned contract talks until he can get a clarity over his position under Mourinho.
Martial’s relationship with Mourinho deteriorated during the backend of the previous campaign after he found himself dropped to the bench upon the winter arrival of Alexis Sanchez.
Thereafter, the Frenchman struggled to make an impression during the remainder of the campaign and the situation has remained the same this term where he has made a solitary start against Brighton & Hove Albion.
As such, The Sun claims that Martial has been reluctant to extend his United contract since May and the standoff could prolong for the ongoing campaign, though the club want his future resolved by next summer.
At present, Martial may have to stick with a bench role for the forthcoming Premier League game but he could however earn a start in the League Cup fixture against Derby County, given the manager may seek to rotate the squad.
On regular periods, Marcus Rashford would unquestionably be the preferred pick to lead the line for such an encounter but Martial should have the advantage this time around with the former serving a three-man suspension after his sending-off versus Burnley.
Martial presently has just 10 months remaining on his current £65,000-a-week contract with United but the club have the option of an extension clause which would prolong his stay by an additional season.