Everton confirm their second signing of the transfer window 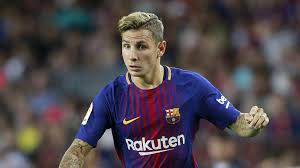 Everton have confirmed their second signing of the summer transfer window with Lucas Digne joining them from Barcelona on a five-year contract. The Frenchman had played second fiddle to Jordi Alba during his two seasons with Barcelona but he now has the genuine chance to compete for a starting spot with Leighton Baines having entered the twilight of his career.

The Toffees have been very selective in terms of their transfer business this summer and this has largely resulted from their misjudgement last year where the likes of Sandro and Davy Klaassen struggled to adjust to the rigours of the Premier League.
With Digne, Everton are getting a player who is strong with his passing attributes and his partnership alongside fellow summer signing Richarlison could be relishing to watch on the left side of the field.
With less than a week remaining in the transfer window, the Toffees are still continuing on the search for new recruits and the central defence appears a position they may need to strengthen before the deadline.
Ashley Williams has most recently been permitted to join Stoke City on a season-long loan and this is likely to extend the urgency for a new centre-back, considering the Toffees’ defensive woes last term.
As things stand, the Merseyside outfit have been linked with a probable move for Barcelona’s Yerry Mina but the move remains complicated with Manchester United also in the running for the Colombian.
Nevertheless, Silva’s side could yet have the advantage over the Red Devils, should the Blaugrana demand a potential buy-back clause which they seem to include in the contracts of their departing players every now and then.
Everton started their pre-season with stunning 22-0 win over Austrian minnows Irdning but they have since struggled to overcome clubs with one draw and four defeats in the process.