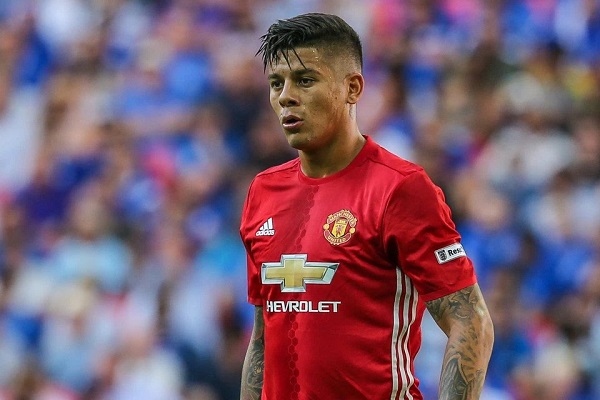 Premier League side Everton are understood to hold an interest in signing Marcos Rojo from Manchester United this summer. The Argentina international has recently been deemed surplus to requirements at Old Trafford with Jose Mourinho keen on pursuing a new central defender before the transfer deadline.
According to The Telegraph, the Toffees have expressed an interest in signing the former Sporting graduate, who could be available for a fee in the region of £20m this summer. Nonetheless, the Merseyside outfit are understood to have concerns regarding Rojo’s £120,000-a-week wages and they may not pursue him unless he takes a probable pay-cut.
Compared to the previous summer, Everton have remained very cautious in terms of spending in the transfer market and so far, they have recruited just a solitary player in the form of Richarlison from Watford.
Despite this, new boss Marco Silva has assured the fans that there should be more additions before the transfer deadline, though he is understood to favour more quality than quantity for the summer.
Aside from Rojo, the Toffees have also been credited with an interest for Barcelona duo Lucas Digne and Yerry Mina this month but they could potentially face competition from United for the latter.
United boss Jose Mourinho has expressed a keen intent on signing a new centre-back before next month’s deadline and Mina has most-recently propped up their radar with a deal for Harry Maguire appearing unlikely.
As such, Everton’s pursuit of Mina could go down to the wire but the Merseyside outfit will be hoping to lure the Colombian with the assurance of regular gametime which may not entirely happen at Old Trafford.
Mourinho has recruited Victor Lindelof and Eric Bailly to bolster the central defence in the past two summer transfer windows but neither has managed to cement a regular role from the starting lineup.