Liverpool have already secured the signing of Virgil van Dijk for the winter transfer window but the Reds must further strengthen their squad for the second half of the campaign.
More importantly, the Merseysiders must hold on to the key players and Emre Can has been vital for Klopp.
Juventus have mainly been linked with the German international in the past few months and the latest reports are intriguing.
According to a report covered by TuttoSport (press image provided below), the Italian champions are ready to offer 22-year-old playmaker Marko Pjaca plus cash to Liverpool in order to lure Can from the Anfield club.
Also Read: Liverpool Agree Deals worth £126.5million to Secure Signing 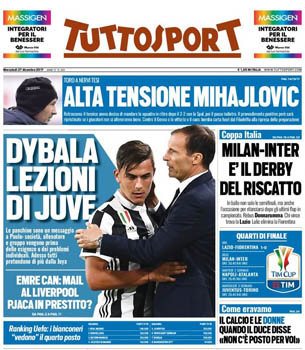 The Croatian attacker was signed from the Dinamo Zagreb last year for a fee worth 23 million euros and lately, he has mostly been on the treatment table.
This season, he has only made 4 appearances in the Primavera 1, scored 2 goals and provided 3 assists.
Pjaca can play anywhere in the attacking third but at the moment, he is not good enough for Liverpool, who have been rampant up front this season.
Emre, whose contract with the Reds will expire in summer, has scored 4 goals in 23 games for the club this season. With Henderson out injured at the moment, Klopp must not let Can leave in the winter window.