Liverpool midfielder Emre Can’s future is up in the air. The German international will be out of contract next year and in all fairness, the Reds must sell him in the winter window and lure Goretzka from Schalke.
Leon has been linked with a move away from the Bundesliga side and the latest reports going on in the Spanish media suggest that he is expected to leave.
According to Mundo Deportivo (Press Image provided below), Schalke are prepared to sell Goretzka in the winter transfer window because they do not want to lose him for free next summer when he will be out of contract.
Also Read: Versatile $116million Star Offered to Klopp’s Liverpool
The Spanish source have mentioned Liverpool as one of the clubs looking to sign the 22-year-old Kaiser, who has scored four goals in 10 appearances in all competitions this season.
As per a report covered yesterday (via Don Balon), the midfielder rejected Barca’s offer in search of a move to PL and he may even have an agreement with the Reds.
Schalke know that Goretzka will depart, in such a scenario, they are looking to replace him and Mundo Deportivo claim that the German club want to sign Victor Camarasa from Real Betis. It is stated that the 23-year-old Spanish midfielder has got the physical attributes that would be perfect for German football. 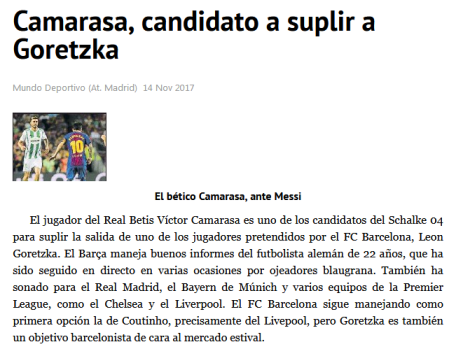