After Liverpool's Offer – Star has Made a Decision

Liverpool have been linked with German international and Schalke midfielder Leon Goretzka for quite some time and the latest reports are intriguing.
The 22-year-old versatile midfielder is going to be out of contract next year and top clubs are interested in hiring his services.
According to a recent report covered by Mundo Deportivo (press image provided below), the likes of Liverpool, Barcelona, Juventus and Bayern Munich have made offers to secure the signature of Leon.
Also Read: Not the News Liverpool Fans Wanted after the Maribor Game
The Spanish source have mentioned that Goretzka has already decided and he only wants to join the Catalan giants.
He was part of the German national squad that won the Confederations Cup in July. This season, he has so far featured in 9 league games and netted 4 goals.
Mundo Deportivo state that the player is now assessing whether to move to Barca in the winter transfer window or wait for the summer transfer window. It is stated that the German club want Goretzka to leave in the summer so that he can help the team qualify for the next season’s Champions League. 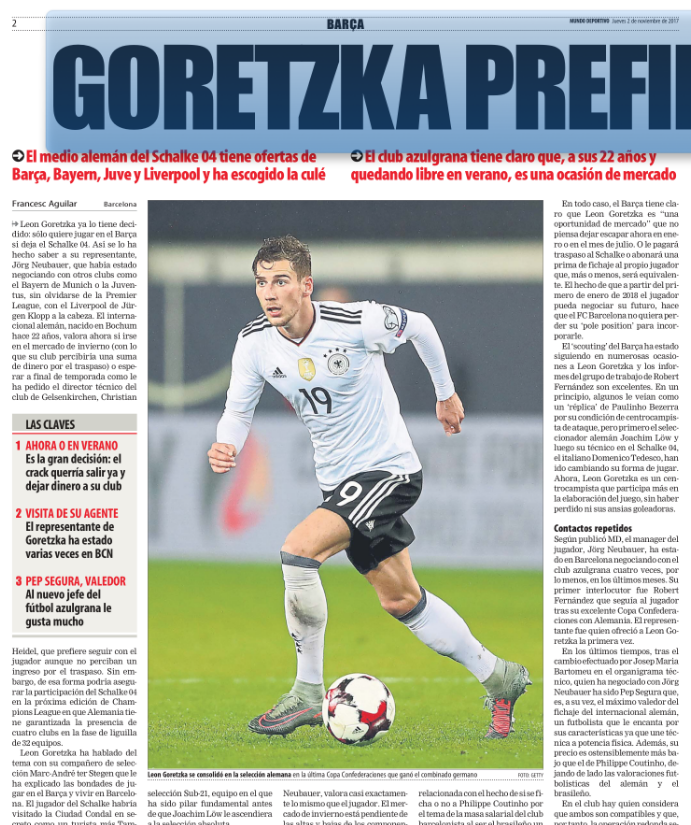