Deal Close but Should Arsenal Seal $67million Signing of Star

Arsenal have lacked a world class out and out center forward since Dutch star Robin van Persie left the club to join Manchester United few years back.
Since then, only Alexis Sanchez has managed to score 20+ league goals in a season (last campaign) for the Gunners. The likes of Welbeck and Giroud have been injury prone and not so consistent.
The North Londoners badly need a top striker this summer if they are to have any chance of winning for the PL title next season and reports suggest that they are close to signing (Telegraph) Alexandre Lacazette from Lyon in a deal worth 52 million pounds ($67million).
The question is, should Arsenal really seal the signing of the French international?
In the last campaign, the 26-year-old striker netted 28 goals in 30 Ligue 1 appearances for Lyon but detailed stats obtained by Oulala suggest that the North Londoners might be making a mistake by signing him.
Oulala is a daily Fantasy Football site with no seasonal commitments so you can register your team now and earn real cash. In case you are interested in American Football then you must join DRAFT to instantly get a bonus with Draft Promo Code.
As per the stats obtained by Oulala (infographic provided below), Alexandre did manage to score 28 league goals but it must be taken into consideration that 10 of those came from the penalty spot.
He played for 2408 minutes and scored 18 goals (excluding penalties) i.e 134 minutes per goal. On the other hand, Olivier Giroud played 1198 minutes in the Premier league and managed to score 12 goals (0 penalties) i.e 100 minutes per goal.
In the past three campaigns, Lacazette has scored 76 goals in a weak league (20 from the penalty spot).
Before moving to the Emirates, Giroud won the French title with Montpellier in the 2011-12 season and he was the joint leading goalscorer with 21 goals. However, since joining the Gunners, he has not been able to hit the 20-goal mark in the Premier League.
Even Didier Deschamps has mainly preferred Giroud over Lacazette. The Arsenal striker was a key member for France in World Cup 2014 and Euro 2016, whereas, the Lyon striker was not even selected in the competitions. He made his debut for the senior national side back in 2013 and so far, he has only played 11 times.
Therefore, it will be fair to say that Alexandre’s stats are not convincing and Arsenal might be making a mistake. In your opinion, is Lacazette good enough to be a hit in the Premier League? 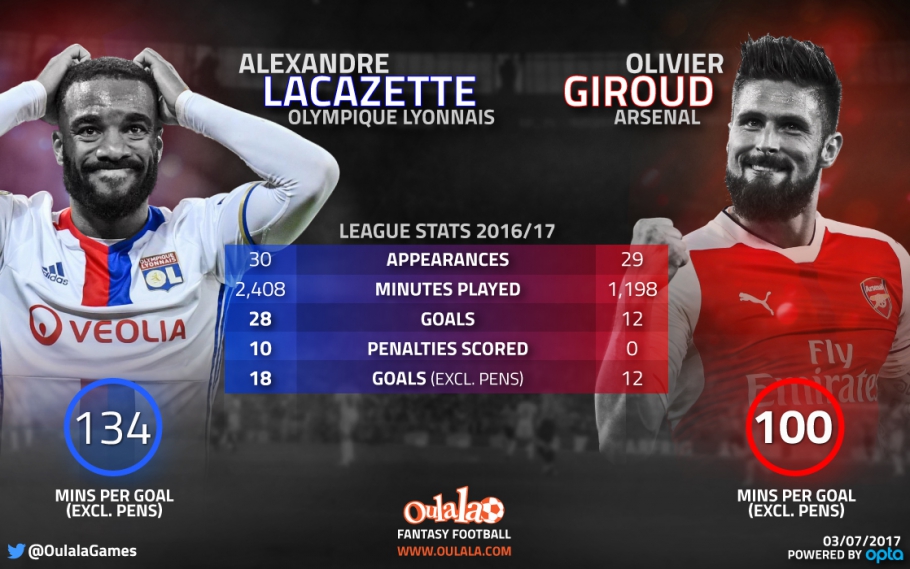