Liverpool are serious about signing a top quality attacker this summer and the likes of Mohamed Salah and Gelson Martins are heavily linked with the Anfield club.
Earlier in the day, we covered a report (via KingFut) claiming that the Reds are close to signing Salah from Roma after accepting to meet the asking price of 45 million euros.
Now, Portuguese source A Bola have claimed that Liverpool are prepared to make a huge move of €50million to hire the services of Martins from Sporting CP.
Also Read: 4-3-3: Liverpool’s Potential XI Next Season with Neves and Salah
Not so long ago, it was reported (via Daily Mail) that Liverpool were in negotiations to sign the 22-year-old winger, who has a release clause of 52 million pounds ($66.5million) in his contract.
As per Saturday’s edition of A Bola, Sporting rejected Liverpool’s initial offer worth €40m-45m for the attacker and will not settle for less than €50million. The report says that the Reds are now ready to break the bank and hope that they can reach an agreement to finally secure his signing.
In the last campaign, Gelson featured in 44 games for Sporting, scored 7 goals and provided 14 assists. In your opinion, should Liverpool sign Salah or Martins? Highly unlikely that they will sign both. 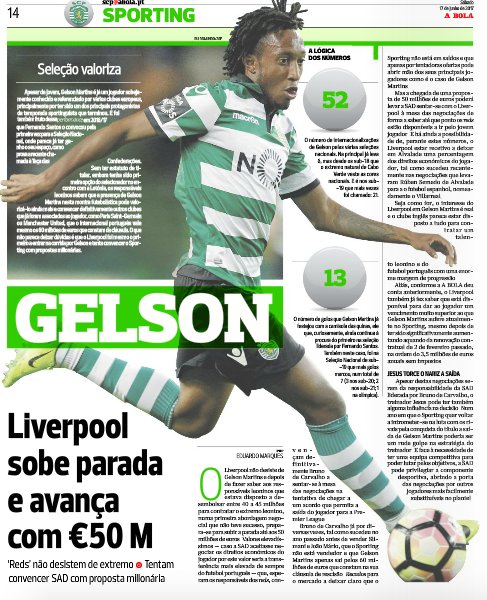