Liverpool have to improve their key departments in the summer transfer window and as far as the midfield is concerned, Napoli star Piotr Zielinski is once again in the focus.
Zielinski was impressive for Empoli (on loan) in the 2015-16 campaign and the Merseysiders were keen on hiring his services last year as well but the move did not happen.
Now, according to Il Mattino (press image from SW), Klopp is still ready to secure the signature of the 23-year-old star and Liverpool have already made an initial offer for him.
The Italian source state that Liverpool recently made an offer worth 25 million pounds for the Polish international but the Italian side rejected the move because they want a figure closer to his mammoth release clause of 70 million euros ($79million).
Also Read: Ex Roma Forward – $56million Star will Sign for Liverpool
The former Udinese star is a creative central midfielder, who scored 5 goals and provided 6 assists in 35 games for Empoli in the 2015-16 Serie A campaign. Moreover, in the last campaign, he scored 5 goals and provided 7 assists in 35 league appearances for Napoli.
Napoli president Aurelio de Laurentiis is not going to let Zielinski leave for cheap but surely he is not worth 70 million euros. If the Serie A side refuse to bring down the asking price then Liverpool should forget about luring him.
Instead, they must focus on signing Bundesliga star Naby Keita from RB Leipzig. In your opinion, who should Klopp sign to reinforce his midfield? 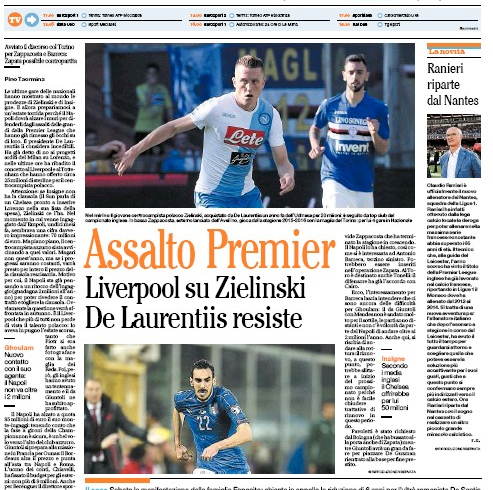