Arsenal Have Offered Over $350,000-a-week to Agree Deals with Stars 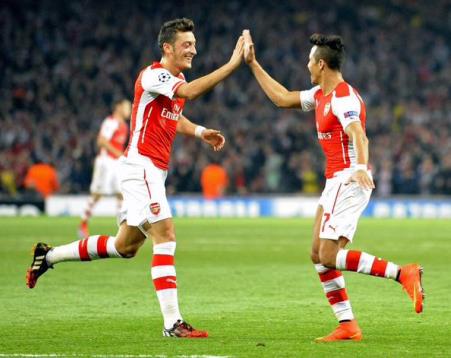 Arsenal managed to win the FA Cup yet again under the management of Wenger but failure to earn Champions League qualification remains a massive set back.
Top quality players like Ozil and Alexis deserve CL football and it will not be shocking if they look to leave the club in the summer transfer window.
The North Londoners have been trying to agree new deals with the above mentioned duo for a long time and as per the latest reports, they have offered deals worth over $350,000-a-week to make them stay.
Few days back we covered a report (via Daily Mail) claiming that the Gunners have offered £275,000-a-week (352,000-a-week) deal to agree a new contract with Alexis.
Yesterday, Mirror claimed that Arsenal want to extend Sanchez’s stay until 2020 and are set to offer him the above mentioned wages. Moreover, the Gunners have already offered a deal worth £280,000-a-week (358,000-a-week) to Ozil.
Alexis was without doubt Arsenal’s best player in the recently concluded campaign and record signing Mesut Ozil remains an important figure as well.
As per the provided Mirror link, the contract scenarios of the duo will be discussed today at Arsenal’s board meeting. If they opt to leave, it will surely be hard to replace them without the Champions League around.
The British source claim that Arsenal could be interested in Algerian international Riyad Mahrez if he is available at the right price. In addition, Wenger wants to hire the services of Thomas Lemar from Monaco. In your opinion, are Mahrez and Lemar good enough to replace Ozil and Alexis?
Also Read: Can Arsenal Beat Chelsea in the Race to Sign €100million Star?