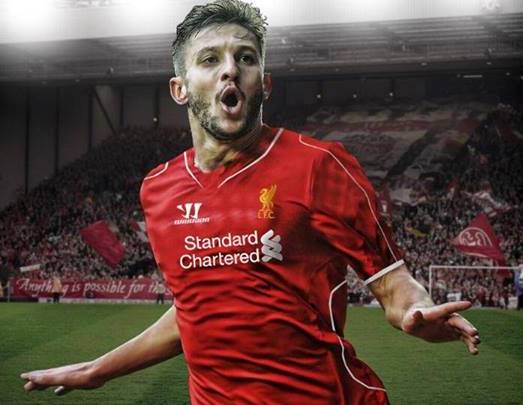 According to recent reports, Liverpool star Adam Lallana has been heavily linked to sign a new deal with the Anfield club.
As of now, the Reds have not made any official announcement on the subject. However, as per reports in the British media, we have two claims and it can’t really be confirmed which one is authentic. Nevertheless, we can debate about it.
On 29th January, Express claimed in an exclusive report that the 28-year-old England international has agreed a new four year deal worth £120,000-a-week, £25million.
Later that day, The Sun came up with a report and stated that the former Southampton star is set to agree a fresh contract that will make him earn £150,000-a-week, £31.2million until 2021.
On 29th January, Metro and Daily Star covered the story reported by the Express. On the other hand, Mirror (yesterday) and Telegraph (today) covered the story reported by the Sun.
Lallana has been in the form of his life for the Merseysiders this season. Moreover, yesterday, he was named England Player of the Year for 2016. Overall, Adam has played 24 games for Liverpool in the current campaign and scored 7 goals.
The likes of Milner and Sturridge currently (Star) earn £120,000-a-week for the Reds. Not to forget, Coutinho recently became the highest earner at the club after signing a new deal worth £150,000-a-week (Mirror).
For Liverpool, Lallana might be as important as Coutinho but the English star is definitely not a better playmaker than the Brazilian. Moreover, Philippe has been consistent for the Reds since joining the club from Inter Milan four years ago and Adam has only shown consistency this season.
Therefore, Coutinho surely deserves to be the best paid player and £120,000-a-week should be a fair salary for Lallana.
Also Read: Liverpool Have Inquired About Signing 23-year-Old Player