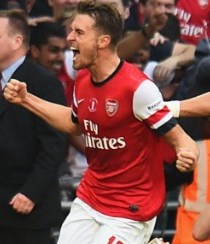 Arsenal are nine points behind league leaders Chelsea and must return to winning ways after back to back defeats if they are to have any chance of winning the title this season.
Next up, the North Londoners will face the Baggies in the Premier League and should be considered favorites to earn all three points at the Emirates Stadium.
As far as the team news is concerned, eight players are out injured for Arsenal and only Ramsey is expected to be fit to face West Brom on Boxing day. (via PhysioRoom). The Welsh international may get into the squad but it will be surprising if he starts vs the Albions.
The likes of Chamberlain and Mustafi are still out injured. Therefore, Iwobi and Gabriel should get the nod to start again.
Wenger may make only one change in the starting XI that played vs Man City last weekend. Egyptian star Elneny may replace Coquelin in the center of the park.
Here is Arsenal’s probable 4-2-3-1 XI vs the Baggies.