Having completed the signing of Petr Cech from Chelsea, Arsenal fans are hoping that club will continue to bring world class players this summer.
However, Gunners are also focused on selling stars that are surplus to requirements and German attacker Lukas Podolski is in the list.
Arsene Wenger has many top quality playmakers for first team and depth hence there is no place for the former Bayern Munich star at the Emirates. The German was loaned out to Inter Milan in the winter transfer window but failed to shine with the Serie A side.
According to reports, Podolski has finally agreed to transfer away from Arsenal and will be joining Turkish side Galatsaray.
As per the provided link, the World Cup winner has accepted a three year contract with Gala and Arsenal will get £2.85m as transfer fee.
Lukas Podolski featured in 82 games and scored 31 goals for the North London club. Gala are getting quality player but one that is past his best now. 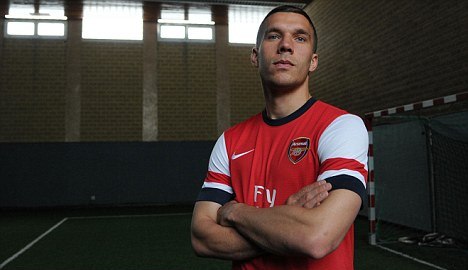