After a disaster result at the weekend Arsenal will look to get back to winning ways when they face Leicester tonight.
Leicester City held the gunners to a 1-1 draw when both sides met in the premier league early in the season on 31st August.
Alexis Sanchez was the one to score for Arsenal that time and the Chilean international is playing as a lone striker tonight. Leandro Ulloa scored the goal for Leicester on that day to rescue the home side.
Nevertheless, the North Londoners have enough fire power to earn all three points and pressurize the teams above them in the race for fourth spot.
At the Emirates Stadium, Gunners should hold stronger cards and any other result but an Arsenal win will be an upset.
Leicester City are rock bottom in the league with just 17 points from 24 games and lost their last league game at home to Crystal palace.
Here is Arsenal’s confirmed starting XI formation vs Leicester City. 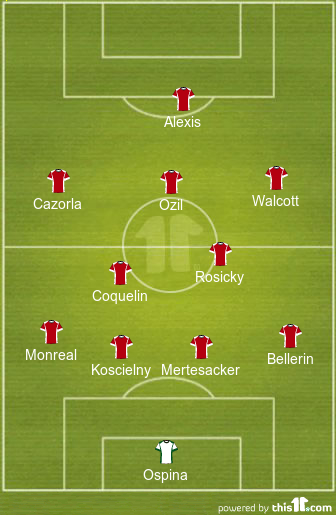