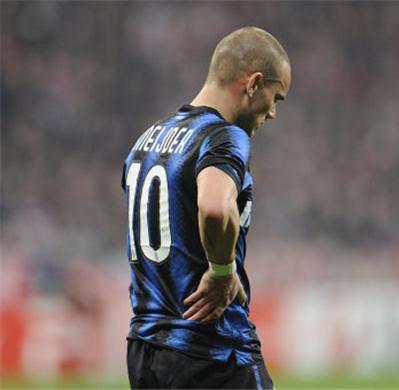 Back in 2010, Wesley Sneijder was the best attacking midfielder in the continent having won the treble with Inter Milan.
The one club that was heavily interested in securing his services was Manchester United but the Netherlands star stayed put.
Since then, numerous transfer windows has passed with Sneijder linked with move to Old Trafford but the move did not happen and the Dutch star moved to Turkish club Galatasaray.
However, this time it seems that the Red Devils will secure his signing in the upcoming winter transfer window in January.
According to reports, Manchester United are to finally sign the much awaited superstar with his compatriot Louis van Gaal in charge.
As per the provided link, the Turkish giants have not paid him three months of wages and that activates a clause in his contract to leave for a new club.
The 30 year old superstar was a key member of the Netherlands squad that earned third place in the World Cup Finals in Brazil.
Sneijder’s best days are surely behind him but he has still got a lot to offer and can add more quality and depth to United’s attack.
The only question is, where will he play in the United setup. Sneijder plays in the hole behind the striker and that place is currently occupied by captain Wayne Rooney and Spanish maestro Juan Mata.
We shall see how the transfer saga unfolds in the winter window.
Follow Soccerisma on Twitter: Soccerisma